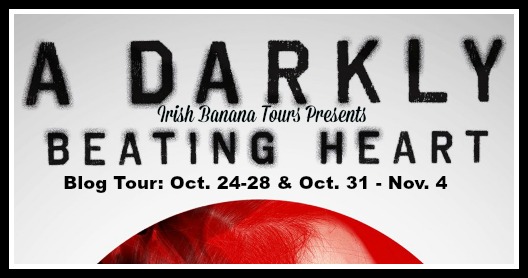 Welcome to the next stop on the A Darkly Beating Heart blog tour hosted by Irish Banana.  Lindsay Smith provided us with her Top 10 things or places that reminded her of her book.

1.  A too-quiet forest as it starts to rain.

Reiko finds all kinds of secrets hidden in the mountainous woods outside the town of Kuramagi. I love that metallic wet scent on the air as the clouds just start to open up, and the dark gray sky contrasted with deep greenery, the way it goes eerily quiet and you can imagine all sorts of things tucked into the gaps between noises. Not that I particularly want to encounter what Reiko encounters!

2.  Crammed on the subway during rush hour.

I ride the Metro in Washington, DC as part of my daily commute, and it’s always fascinating to me that with so many people squeezing onto the trains, that for the most part, we all follow a social contract to keep to ourselves and shuffle about in our own little bubbles. Reiko dreams of smashing that contract to bits in parts of the book as she rides the Tokyo subway system.

It’s better if I don’t explain why this common Japanese snack food reminds me of A Darkly Beating Heart. Trust me.

4.  The lightning-strike first instant after a rejection, betrayal, or loss.

For Reiko, that moment seems to stretch out forever. She has a hard time letting go of that initial fire of anger. She wants to let it burn and burn.

Or any school/university/industrial building long after everyone’s left and it’s just you and the hum of the fluorescent lights and an eerie, distorted sense of time. Reiko fell in love with her first girlfriend at arts camp, and remembers striving and striving to impress her in one of those weird liminal hours by becoming a better artist than she really thinks she was.

This beautiful wooden Shinto shrine is embedded inside a lush forest right in the heart of Tokyo, though you’d never know it from the blanket of quiet that surrounds it. Reiko walks to the shrine after lurking around the Yoyogi Park bridge entrance, where all the cosplayers, gothic Lolitas, and aspiring aidoru hang out to be seen, and the contrast between the two settings overwhelms her.

When Reiko finds herself dressed in historical Japanese clothing, she feels horribly out of place, but quickly accustoms to the wooden sandals and complex folds of the different styles of kimono.

Reiko sometimes feels that the only way to release her bundle of anger and frustration is against the edge of a razor. But there are many other sharp and dangerous things all around her the deeper she delves into the mysteries of Kuramagi.

Before the incident that sends Reiko running to Japan, Reiko loves to make collages from her photography, creating strips of color and shapes that can put her thoughts and feelings on paper. Now, though, Reiko only picks up her camera to take publicity stills for her cousin, an aspiring aidoru.

10. The fog-shrouded streets of a historic Japanese village.

Reiko’s story came to me on a spooky Halloween walk through the historically preserved village of Tsumago. The only lights came from paper lanterns hanging in front of the low wooden structures that twisted around the hillside, bobbing like glowing eyes in the fog. It was too easy to conjure up all sorts of dark and sinister things that could lurk in the night between those lanterns. 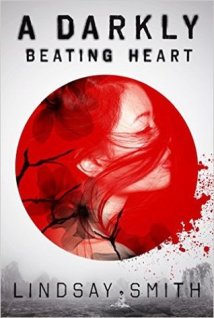 About A Darkly Beating Heart

A troubled girl confronts her personal demons in this time-travel thriller alternating between present day and 19th century Japan.No one knows how to handle Reiko. She is full of hatred; all she can think about is how to best hurt herself and those people closest to her. After a failed suicide attempt at her home in Seattle, Reiko’s parents send her to spend the summer with family in Japan, hoping she will learn to control her emotions. But while visiting Kuramagi, a historic village preserved to reflect the nineteenth-century Edo period, Reiko finds herself slipping backward in time into the nineteenth-century life of Miyu, a young woman even more vengeful than Reiko herself. Reiko loves escaping into Miyu’s life . . . until she discovers Kuramagi’s dark secret and must face down Miyu’s demons as well as her own.

Lindsay Smith is the author of Cold War-era espionage novels Sekret and Skandal, as well as the fantasy novel Dreamstrider. She writes on foreign affairs and lives in Washington, DC. lindsaysmith.net

3 Finished Copies of A DARKLY BEATING HEART (US Only)

Be sure to check out the other stops on the blog tour!